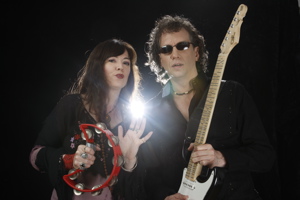 Willie and Babe take blues to a new level. The NYC duo is fronted by virtuosic guitarist Jon Catler and talented singer Meredith “Babe” Borden, offering a singularly exciting type of electric blues. Willie and Babe use the pitches or tones found between the notes of the traditional Western scale to create a mesmerizing pitch-and-rhythm vernacular they call “Harmonic blues.” Behind the entertainment, attentive listeners feel a fervid creative intelligence and a heart present in the microtonal blues. Catler and Borden have forged an undeniable chemistry in the course of playing together steadily for the past 15 years in such pioneering projects as Birdhouse, which features microtonal transcriptions of birdsong, via the path of rock and heavy metal projects, all the way to their current psychedelic electric Delta blues band Willie McBlind, which just released its second CD, Bad Thing, in 2009 on FreeNote Records. Willie and Babe hearken back to the old blues tradition of melding male / female vocals into a harmonious union which runs very deep. This concept is explored further in a new work by Catler called Man / Woman Boogie performed by the 13 O’Clock Blues Band, comprised of Catler, Borden and a band of musicians, that develops the concepts of Harmonic Rhythm and Harmonic Lyrics.

Internationally recognized musician and composer Jon Catler may well be the most innovative blues guitarist active today. His keen interest in microtonal guitar and Just Intonation dates back decades to his Berklee College of Music days. Jon was mentored by the storied avant-bluesman/composer La Monte Young, performing in La Monte’s Forever Bad Blues Band on American and European tours; these days, Jon performs alongside La Monte in the Just Alap Raga Ensemble.

Meredith “Babe” Borden has been a featured singer in the premieres of works by Meredith Monk, Philip Glass, and Scott Wheeler, respectively. She’s been featured in settings like the American Festival of Microtonal Music, the Queen’s Chamber Band, the globe-trotting rock musical troupe HAiR, the opera Waking in New York (as gospel-blues singer Compassion), Off-Broadway theatrical and touring groups, as well as numerous regional and summer stock companies.

Frank-John Hadley of Downbeat Magazine says about Willie and Babe:

“Remarkably, Jon’s bottom-line aesthetic is both traditional and radical: he’s connecting with the subtle microtonal guitar sounds achieved by past pitch-and-rhythm masters Robert Johnson and Charley Patton. Babe’s three-octave singing has something of the miraculous to it, and the unearthly aspect is her ability to enunciate words in a way that taps into the immediacy of Jon’s guitar playing and singing.”